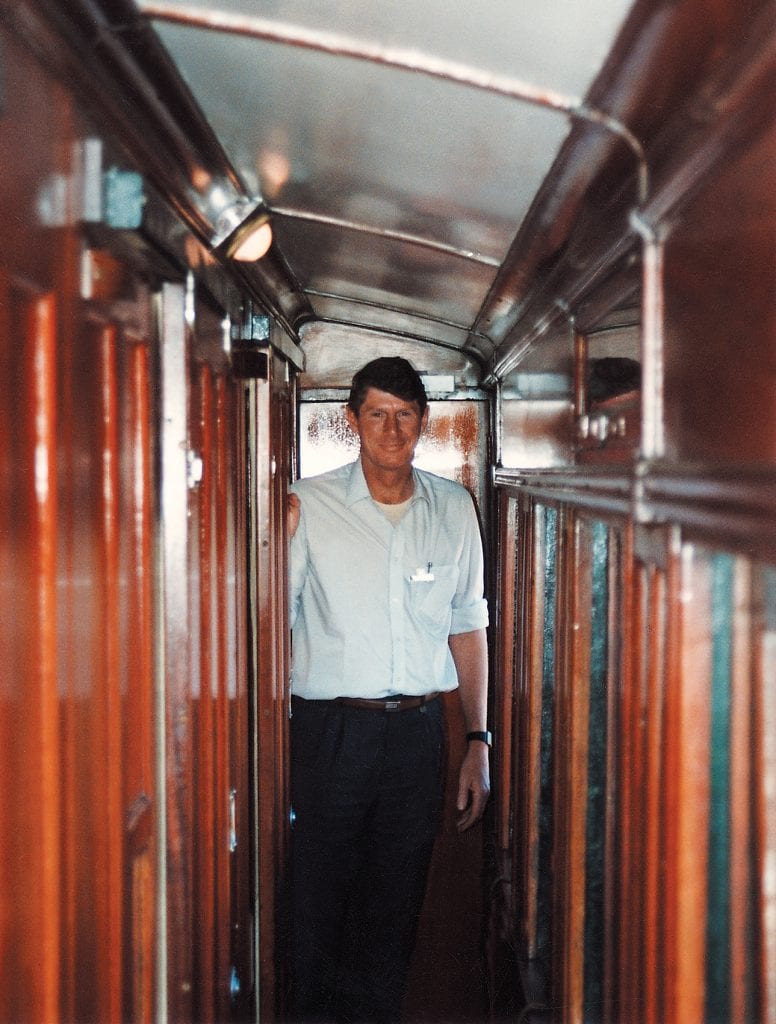 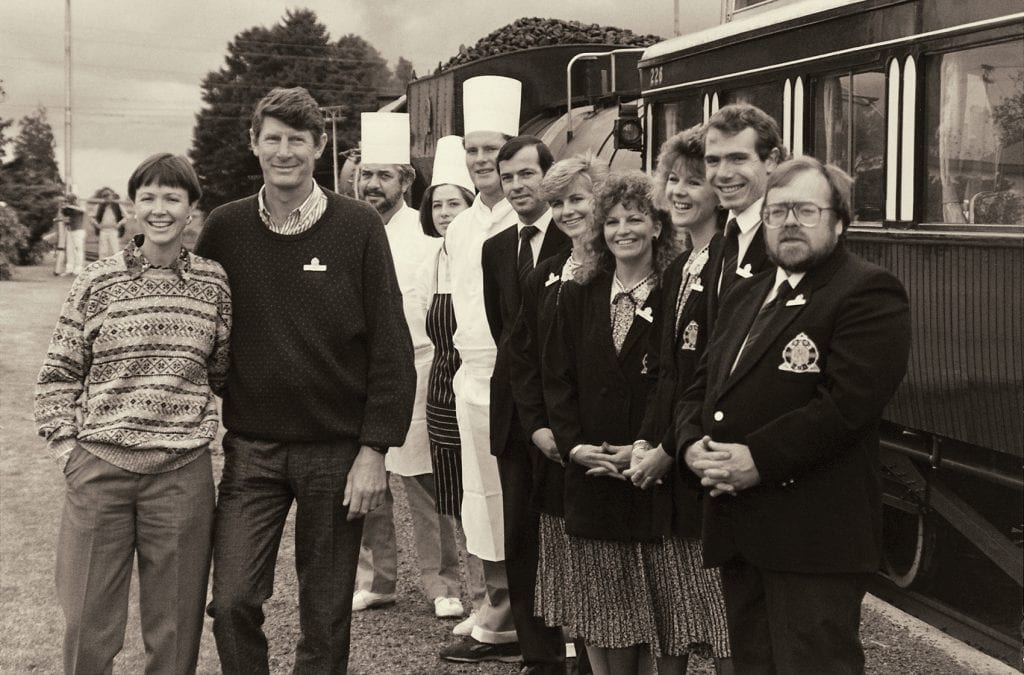 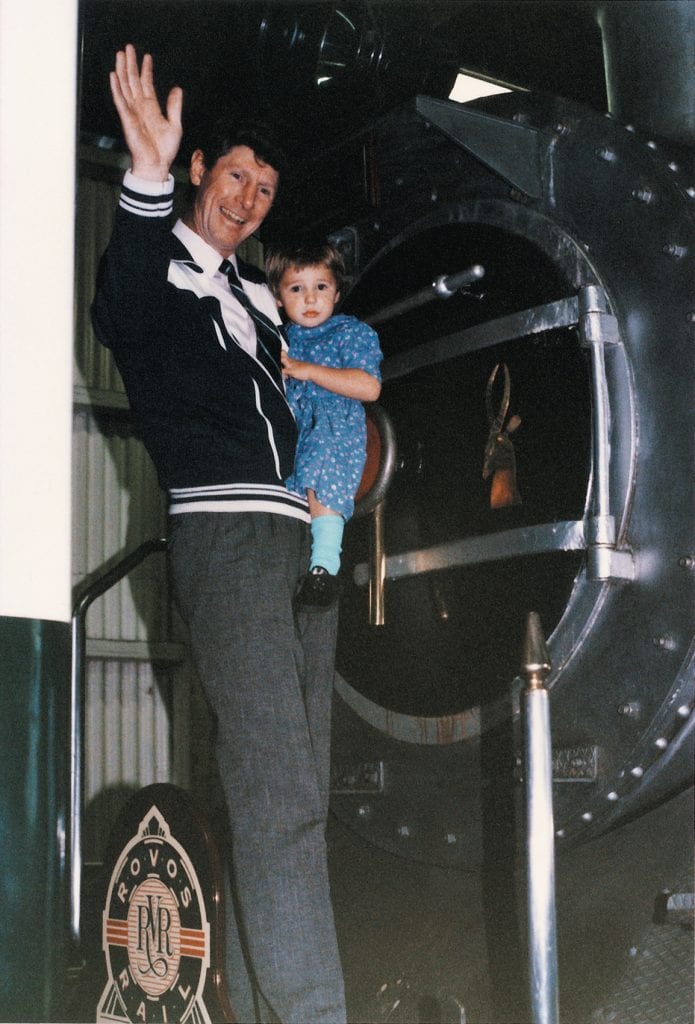 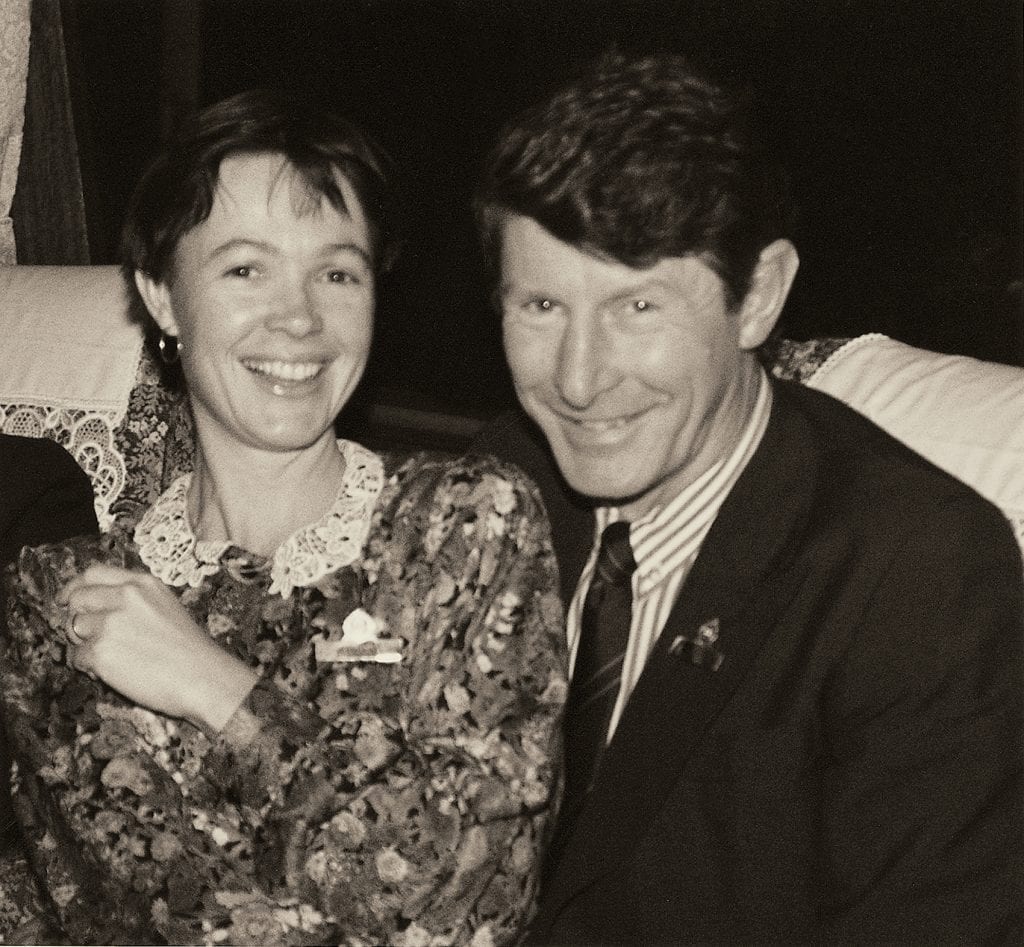 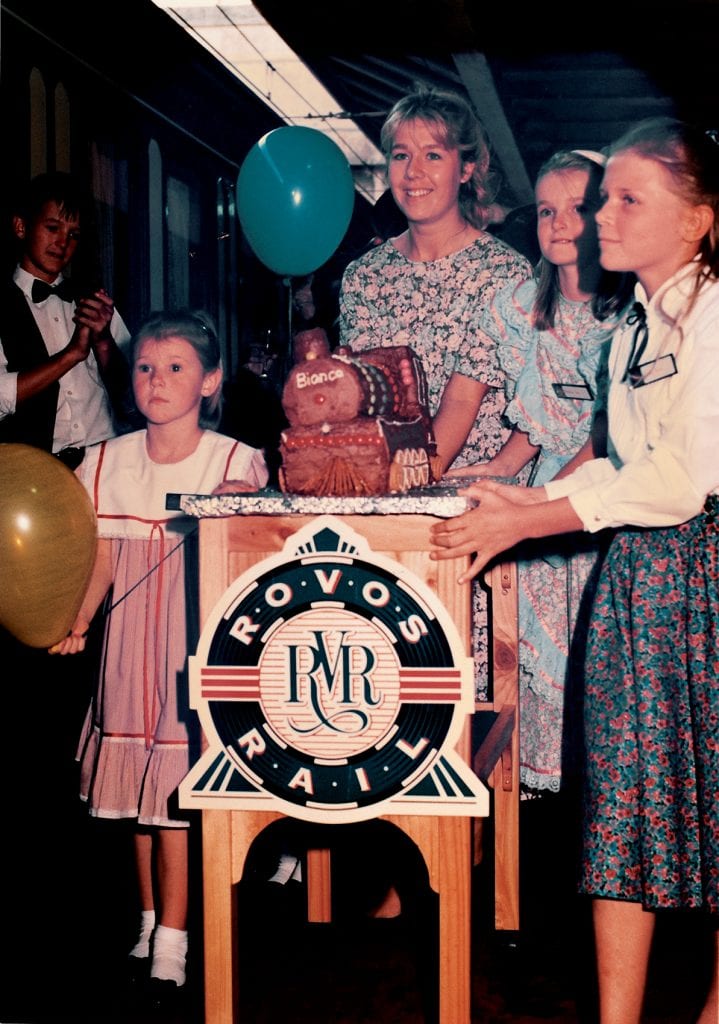 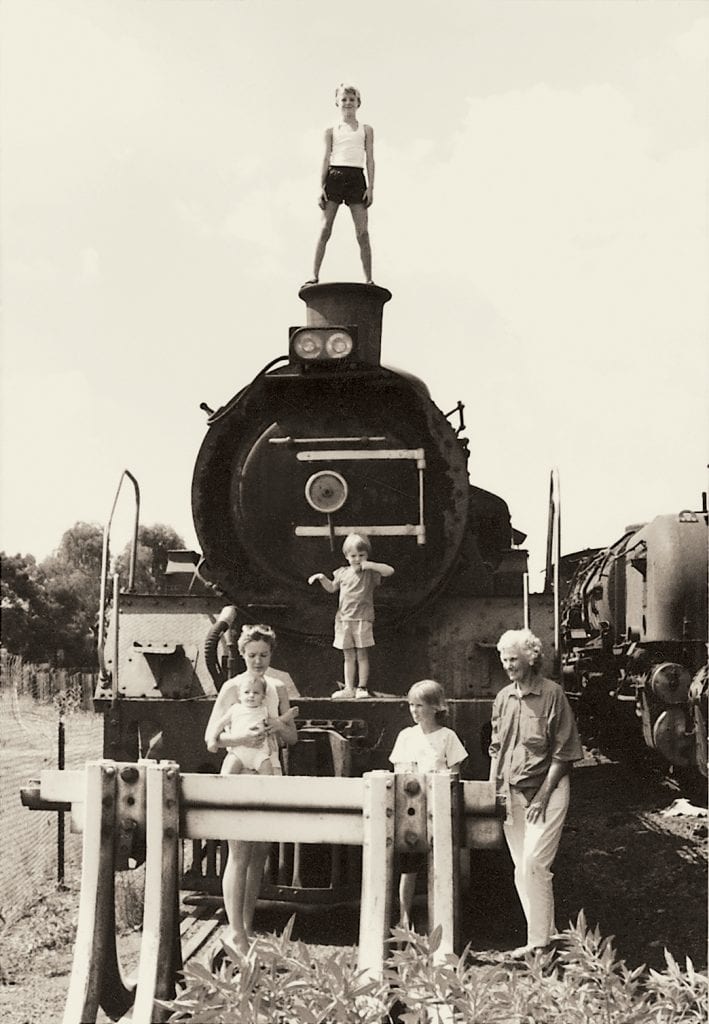 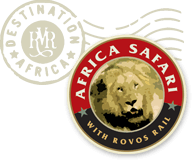 As so often happens, it was a combination of influences and events that led to the purchase of the first coach, the start of what would become Rovos Rail. A Wilbur Smith heroine with her own private railway coach, a man called Phil Acutt with a passion for trains and the presence of the Witbank Steam Railway in the coal-mining town where Rohan Vos ran his successful auto spares business, all played a part.

“Rohan has always been obsessed with things mechanical,” remembers Anthea Vos, who has been at his side throughout and has raised a family in and around developing the railway business. “In fact, he started his first business with the capital derived from the sale of a 1940 Packard and a 1928 Austin that he had rebuilt. Rohan was involved in so many ventures, but I didn’t see this one coming.”

In 1985, Rohan and Anthea took up a last-minute invitation on a Magaliesberg train trip for business suppliers. “I became a train widow on that day,” says Anthea. “I sat all dressed up by myself; Rohan spent most of the time in the engine with the driver. The irony was that we should have seen then how difficult it would be – the train broke down and we were bussed back to town.”

The same year, influenced by his friend Phil Acutt’s love of trains and the work done by the Railway Preservation Society in Witbank, Rohan attended an auction to buy a coach or two – the intention was to restore four carriages and hitch them to a South African Railways train as a family caravan. Steam-train enthusiast, Geoff Pethick, was present at the auction and assisted him. “It was the 26th of September – a cold day with rain in the air – and I’d hoped Rohan wasn’t another penniless lunatic with grand ideas,” he recalls. “As we chatted, I quickly realised that here was a man of vision.”

Several coaches were purchased and taken to the Society’s yards in Witbank to be rebuilt. One of them, Private Saloon 15063, is still in service and another, an engineer’s caboose, stood at Cape Town’s V&A Waterfront for many years where it served as the marketing and reservations office. The complications of working with the South African Transport Services administration soon convinced Rohan that he needed to be self-sufficient where possible. As a result, he purchased a 1938 Class 19D locomotive from Lowenthal’s Scrap Metal in Johannesburg. It was rebuilt by Rovos Rail and named BIANCA after one of his daughters.

Negotiations began with Sam Taute of SAR and Rohan was granted permission to run his train in December 1986. This was when the idea of running a vintage train as a business venture was born. The tariff quoted by the authorities for hauling the train was, however, extremely high and would have made the “family caravan” an extravagant exercise.

After his objection to the charge, the Railways returned a well thought-out curve ball, giving Rohan the right to sell tickets. “I remember the occasion very clearly: on a wintry evening I was subsiding into a hot bath with my Red Heart Rum and coke close at hand. There’d been a power cut, so musing by candlelight about the consequences of turning a hobby into a business, I let my imagination float around in delusions of grandeur. But I knew that launching into the arena of tourism and trains, of which I had no experience, held many dangers. It was an uncharted course and I had little idea where to start, let alone where to aim. However, a unique challenge was right up my street and the decision was made to go ahead. This was – unknown to me at the time – a life-changing moment and sadly, during the next few years or so, I had many agonising thoughts regretting the move. I could never have imagined how all-consuming the business was to become both financially and emotionally.

“Consisting of a locomotive and seven carriages, the train was launched on 29 April 1989, and with four paying passengers, friends and press we set off for the Eastern Transvaal. So, with a four-night Lowveld experience and in 1991 the Pretoria to Cape Town run, the business began to find direction. But, as any train operator or airline will confirm, running a schedule is risky and nerve-wracking. To project consistency and reliability to agents and passengers, it’s imperative to run according to the advertised schedule. Of course, this wears rather thin when passenger loads are less than the number required to break even financially. I found to my horror that one can lose considerably more money establishing a schedule and consequently a reputation than it might cost to buy or construct the hardware.

“To finance this one-way street, I had sold various cash-generating businesses in and around Witbank, mostly to my management partners. Just prior to the train launch, I sold my Witbank and Secunda spares businesses to a public company. I accepted shares for this transaction and these were lodged with the bank as security for the overdraft to finance the train operation. Then, surprise surprise, the public company went insolvent and my shares were valueless. My bankers, of course, were not amused.

“So, with the first democratic elections coming in 1994 and confidence in the business future of South Africa tumbling to an all-time low, they put pressure on me to repay the overdraft. Although I was of the opinion that they were well enough secured and that I could service the account, they were not interested and proceeded to summons me for the outstanding amount in late 1993. The operation was close to break-even at this time, but nobody was interested in investing in the business and I had exhausted every possible avenue of financial assistance.

“Visiting the London World Travel Market during this trying time, I met tour operator Philip Morrell, owner of Jules Verne in London. Between us, we hatched a plan to run the train from Cape Town to Victoria Falls. The package was advertised in the Sunday Telegraph during late December and it was with trepidation that I answered the call from him soon after Christmas. To my relief, he reported that sales were going extremely well and nearly four train loads had been booked. My answer, after a suitably stunned silence, was ‘send cash’.

“And so, bankruptcy was avoided by a nose, and to illustrate the turnaround it was in fact a year later that I purchased 38 redundant carriages from the South African Railways. Since then we have never looked back, although the scars of battle are always there reminding me never to relax.”

Armed with Les Pivnic’s book on dining cars, Rohan started the search for suitable coaches. An early target was the Jewish Guild Country Club in Johannesburg where three vandalised and dilapidated dining cars stood as part of an aborted restaurant venture. All three – KEI, NILE and MODDER – were hauled to Witbank and returned to the rails. In the years since then, family life has been inseparable from the business with Rovos Rail growing up alongside the Vos children. Family holidays always had another agenda as they scoured the far ends of the country for coaches and locomotives to add to their collection.

All the engines acquired for Rovos Rail have been named after the Vos children – Brenda, Bianca, Tiffany and Shaun – and nothing could be more appropriate as the family’s history and memories are so tightly interwoven with the Rovos Rail story of acquisition and expansion. On the 10th anniversary of Rovos Rail, the magnificently restored and rebuilt locomotive – 25NC 3484, which had been converted from coal-firing to oil – was christened MARJORIE by Rohan’s mother, Mrs Marjorie Vos.

Before the first commercial trip, Joy Strydom joined Rovos Rail as its first employee in May 1988 and is still with the company. “Rohan called me out of the blue and we met at a Cape Town restaurant with a railway coach bar. Rohan spent most of the time checking it out to see what had been removed and which features remained. The romance of the railway project – and his enthusiasm – had me hooked.”

Through two decades of hard work, trying times, bankers and accountants (who were by turns sympathetic and sceptical), the birth of a new democracy and a tourism surge, there’s been a special magic about Rovos Rail. “Many of us in those early years didn’t believe that Rohan would ever achieve what he’d set out to do,” says Pethick. “It’s wonderful to see that, despite ups and downs, Rovos Rail is doing well and has helped preserve much of our railway history.”