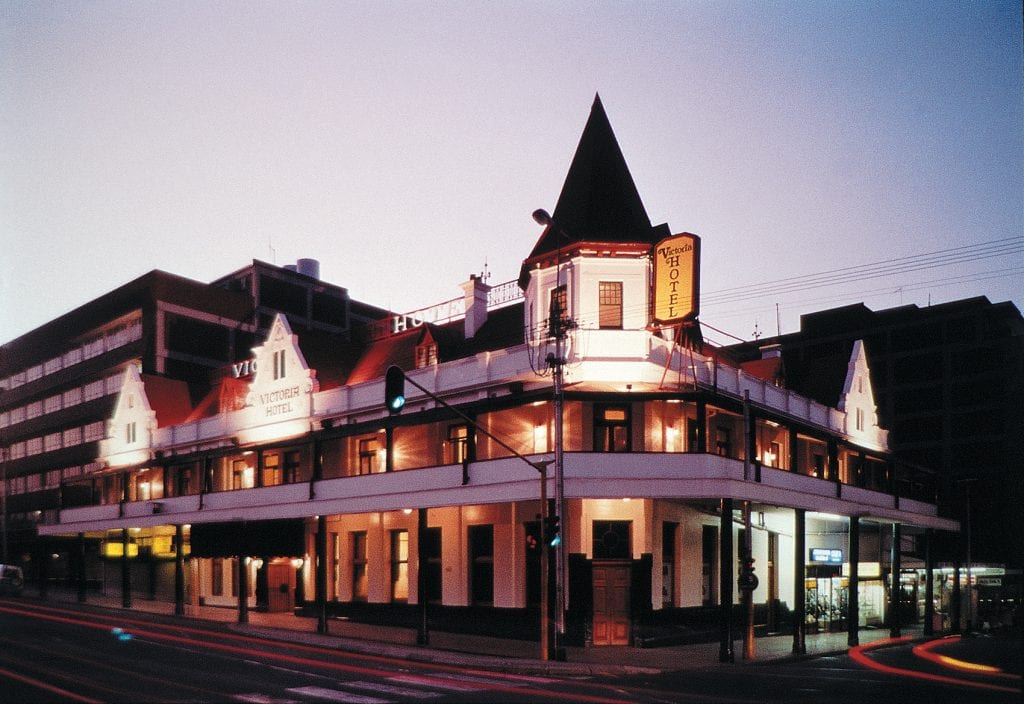 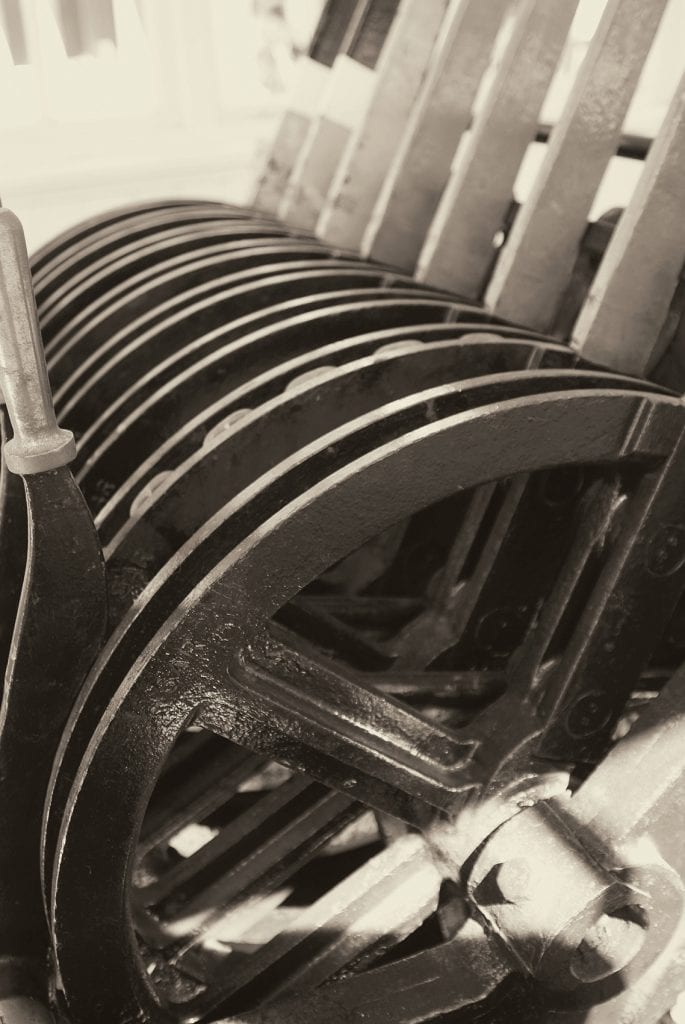 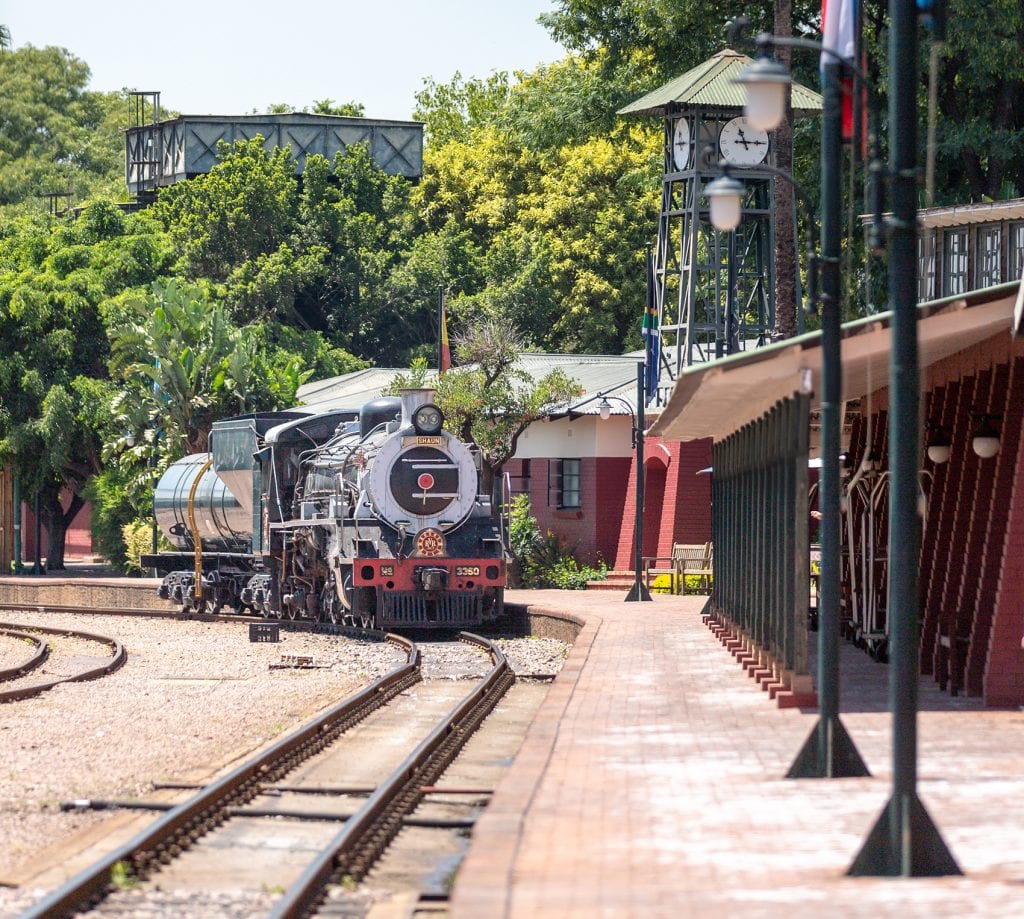 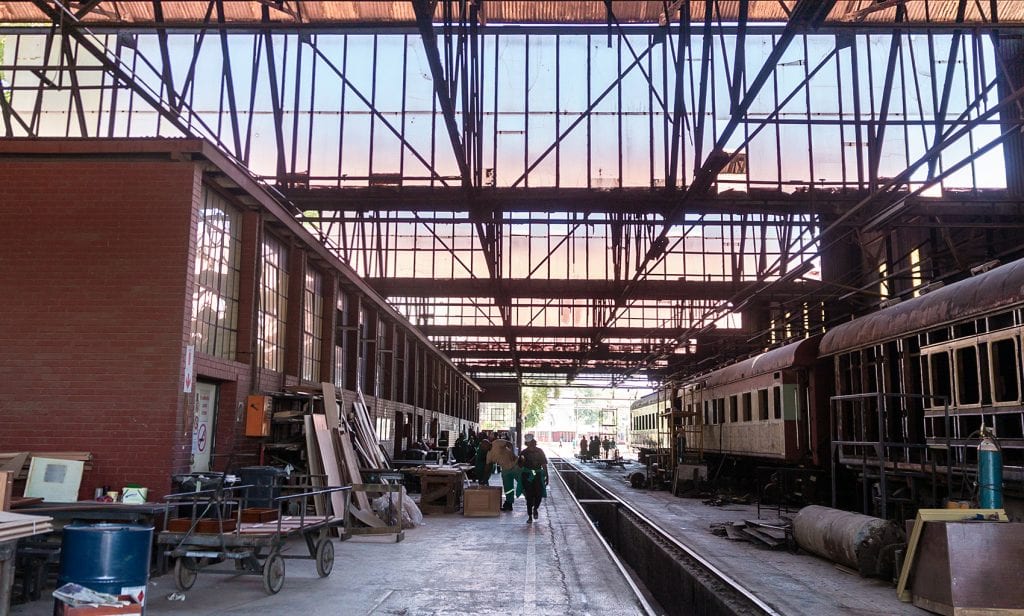 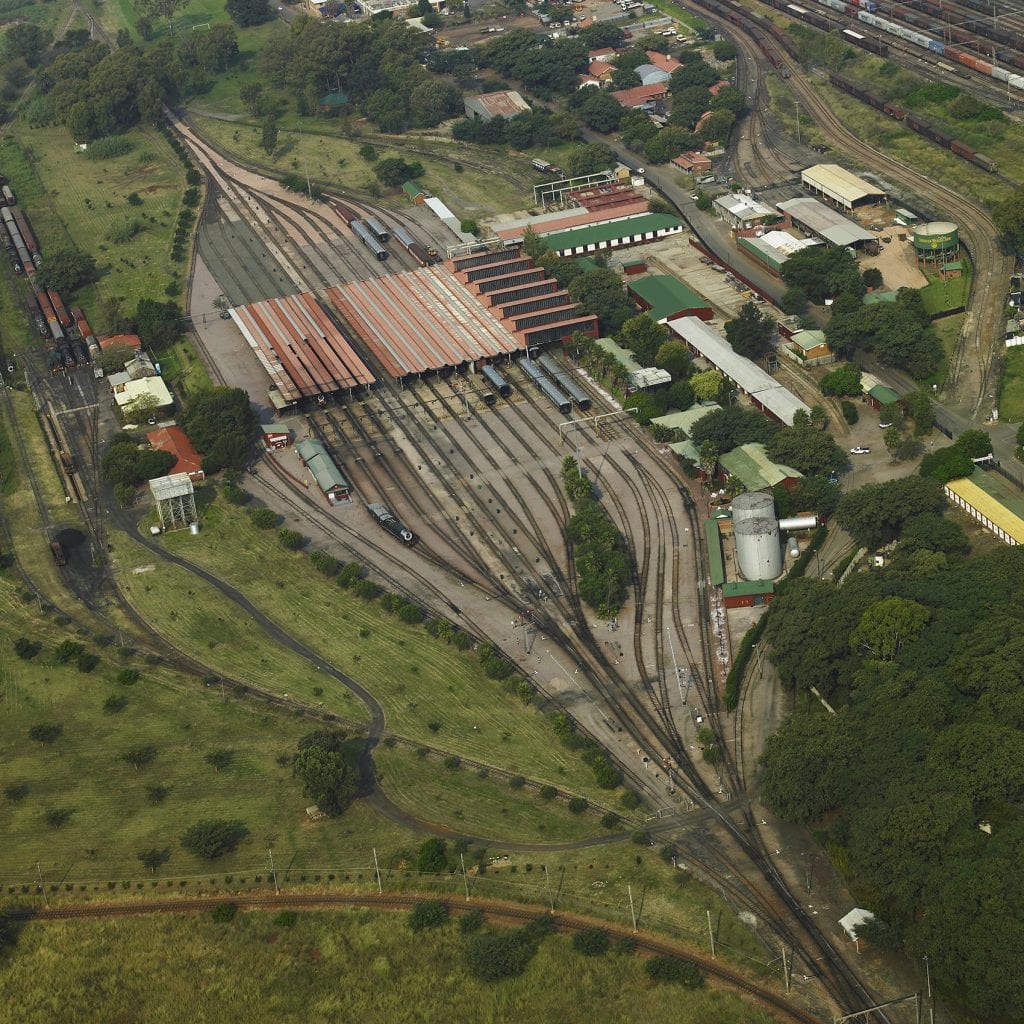 – BY SARAH HETHERINGTON
Once Rovos Rail acquired a lease on Capital Park, new life was breathed into South Africa’s railway heritage. Not only did Capital Park fulfil its previous function as a repair and maintenance depot for steam locos, but it also became the headquarters of Rovos Rail’s entire operation.

The air sings in the still, Highveld afternoon and to the west thunder clouds build above the golden hills. Just a few minutes from the centre of Pretoria, the tracks, sheds and classic railway buildings of Capital Park have been reborn. With his characteristic vision and energy, Rohan Vos – along with his wife, Anthea – has set about transforming the 60-acre property.

In the sheds, teams of workmen repair and restore the line’s dining cars and historic coaches while craftsmen burnish the brass on a Class 25NC loco that’s nearing the end of an 18-month restoration. In the gracious railway station that serves as the departure and arrival point for Rovos Rail, expectant guests sip sparkling wine, excitedly exchanging notes before the afternoon departure.

The low, red-brick buildings along the platform house new laundries, gleaming stainless-steel kitchens and an array of well-stocked storerooms. This is the bustling hub of a provisioning operation that is world-class in terms of efficiency and attention to detail.

As the sun sinks, Rohan stands on the platform and recalls the first time he visited Capital Park. ‘In 1987, when Rovos Rail was in its infancy, I visited these very offices to ask a South African Railways bureaucrat for permission to move some coaches. The property seemed vast and I never dreamed that one day this would be our headquarters. In the corner of his office I spotted an old photograph of a 19D loco and asked him if I could buy it. He refused to sell.’ Rohan pauses, then adds with a wry smile: ‘A few years later that photograph came into my possession and, what’s more, we now own the loco too – 3360 SHAUN.’

It is clear that here is a man deeply content. He’s achieved what many said was impossible – a thriving, private railway with a top-class reputation. He has indulged his own passion for rail travel and trains and in the process has preserved a slice of South African history. Now, with Capital Park as his base, he’s come home. What’s more, he says he’s found a home for his soul.

During the months prior to the official opening, Capital Park was a project that Rohan ate and slept, popping meals into the microwave in his track-side office, sleeping in one of the suites aboard a coach and starting his day with a run through the golden grass around the perimeter of the property. It lies exactly east-west, enjoying the delicate first light of sunrise and fiery African sunsets.

For many years, the company was based in the old Victoria Hotel in Pretoria and the journeys departed from the main railway station.

‘ONE AFTERNOON I DROVE IN HERE,’ ROHAN SAYS, ‘THE PLACE WAS DERELICT, THE TRACKS WERE COVERED IN TALL THISTLES AND THE BUILDINGS WERE DESERTED AND VANDALISED. I KNEW IMMEDIATELY THAT I HAD FOUND WHAT I WAS LOOKING FOR – IT FITTED LIKE A GLOVE.’

The area had been earmarked for development but a comprehensive proposal for restoring and upgrading the site, the importance of the tourism industry and the economic benefits for the area persuaded transport authorities to grant Rovos Rail a long lease. With typical energy and determination, Rohan set his plans in motion.

A transformation was soon underway as layers of old paint were stripped from walls, dirt blasted off sheds and undergrowth cleared away to reveal the railway tracks. The building, which would become part of the station and head office, was gutted and an elegant balcony overlooking the platform added to the façade. A superb model-railway display and a museum of rail memorabilia was built, while an authentic signal box and clock tower were erected on the newly constructed platform. Around the refurbished buildings, hundreds of new plants have taken hold, promising a lush garden setting.

Initially the site was 12 acres in 1999, but over the years it has grown steadily to the current 60. As the other tenants around the original site moved out, Rohan was quick to negotiate leases on those properties, which then had to be rebuilt or rehabilitated to meet with the Rovos standards and requirements. This activity, although expensive, was executed with a view to Rovos Rail eventually acquiring the property from Transnet. Therefore, no corners were cut and as it stands now the buildings and grounds are in top-level operating condition.

‘In 2008, the new loco shed was completed and to finalise this development we installed two lifting stations for our carriages on two of the eight lines coming into the shed. This is intended to speed up the replacement of wheels whenever we have an imminent departure and a wheel or bogie is defective,’ Rohan explains. ‘We also purchased scrap bogies – overhauled and kept ready for immediate exchange. We then built a professional laundry into the old museum building, which certainly improved our turnaround time. The infamous “Moerse Burger” restaurant, which we took over in 2008, was gutted and the rebuild of a meeting and lecture room completed.

‘We expanded our loco department with nine electric locos of 87 tons each and a 36-ton Sheldon Cowans steam crane, all of which we purchased on auction in 2009. They were restored and are all now in operating condition. We also imported six 1973 2200hp diesel locos from Australia.

‘I’m as excited about the property development as I am about the trains. The variety of activity is food for my busybody nature, enabling me to work or unwind depending on my mood. I also derive great pleasure from the growth of the 2 000 trees and countless shrubs we’ve planted. To complement them we created a miniature farmyard with horses, donkeys, cows, ostriches, emus, lamas, goats and so on. Romeo (probably the ugliest donkey I’ve ever seen), has taken to lounging in the loco shed with his extended family. What they find so relaxing in a noisy workshop baffles me – but there you are, donkeys are not to be questioned.’


For the discerning traveller in search of atmosphere, boarding the train at Rovos Rail Station will be a lasting memory. And for the true rail enthusiast, the sight of the gleaming locos and classic coaches in the sheds will provide hours of entertainment. 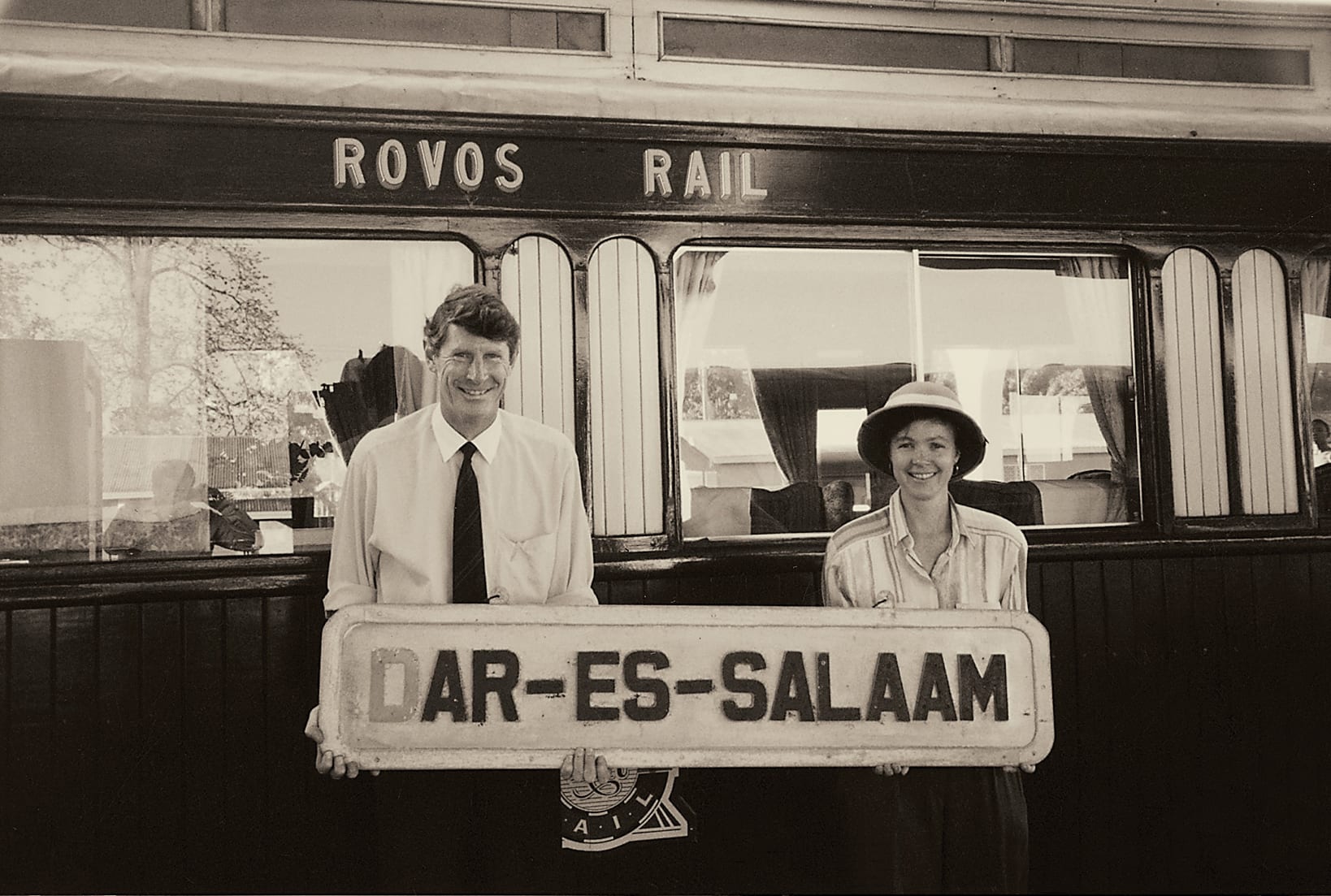 Covid-19 Policy: These terms are ONLY valid for INDIVIDUAL travellers. GROUP bookings need to be handled by your Account Manager and on a case-by-case basis. Please note our DAR ES SALAAM and LOBITO journeys are NOT included in these terms – please contact alicia@rovos.co.za regarding these journeys. We are TBCSA compliant with Covid-19 industry protocols. COVID-19 PREPARATIONS TBCSA COMPLIANCEOKCOVID-19 POLICY